Hank Manriquez was born in Los Angeles, CA and joined the US Coast Guard in 1965 where he spent 4 years between Alaska and San Francisco. He then became a manufacturer’s rep in the pet-supply industry covering 14 states and in 1997 retired from the business with gross sales of over $12 million annually. Through smart investing, Hank retired in the Leavenworth area where he owned a vacation home and has been a part-owner in a local lodge since 1986. He is enthusiastically involved in the community, especially with the Leavenworth Chamber of Commerce and the Bavarian village concept. Hank is the President of the Cascade Farmlands Association, promoting agri-tourism in Chelan and Douglas counties; a member of the 2% lodging tax committee for Chelan County, working with local politicians to pass Senate bill #6237 to change ag-tourism regulations for the State; started the Leavenworth Cards business; and developed Certified Folder Display company to over 160 accounts. Hank’s strong skills involve marketing and sales. He shares a Leavenworth home with his wife, Stephanie, and their menagerie of special dogs and cats.

Ron Skagen is a fourth-generation Douglas County resident and graduated from Eastmont High School in 1972. He earned a degree in Business Administration from Washington State University in 1976 and later graduated from the first class of the Washington Agriculture and Forestry Education Leadership Program. He is a Commercial Loan Officer with US Bank specializing in agri-business and has been a Commissioner for the Douglas County PUD since 2007. Ron was recently appointed as a Trustee to the Wenatchee Valley YMCA and is an active participant in the Eastmont School District, chairing on the 2004 Levy Campaign and serving on the Fiscal Advisory Board Committee. He married his wife Lisa in 2000, and they enjoy a blended family with seven adult children.

Mike Stancil was born and raised in Alabama and is a veteran of the US Army’s 18th Airborne Division, serving on the front lines as an artillery soldier in campaigns in Iraq (Desert Storm), Panama, Cuba, and Yugoslavia. He owns and operates VitaGreen, LLC since 2005 and believes in integrity and morals both personally and professionally. Coming from foster care in Alabama, Stancil said “I know what it’s like to live on skid row. I know what it’s like to not have a family. I feel very blessed and I want to give back.” Mike and his wife Shawn have three children and enjoy family vacations and the outdoors.

Mike Steele is the executive director of the Lake Chalan Chamber of Commerce. He was born and raised in Lake Chelan and is a graduate of Pacific Lutheran University with majors in Political Science and Business Administration. He has served in the White House as a member of the Political Affairs team and has worked with the Washington State Legislature as a member of the Republican Caucus staff. Mike serves as a member of the City Council in Chelan, is an active board member for the Lake Chelan Community Hospital Foundation, serves on the board of directors for the Washington State Chamber of Commerce executives, and other civic groups.

Darci Waterman was raised in the Wenatchee Valley and graduated from Eastmont High School in 1985. She earned an AA from Wenatchee Valley College in 1987, and a BS in Mass Communications from Eastern Washington University in 1989. Darci is the Administrator of the Washington State Apple Blossom Festival and has been for the past 20 years. She is also a member of Wenatchee Central Lions Club and serves on the Board of Directors for the Washington Festival and Events Assoc., the Eastmont Foundation, and Miss East Cascades. Darci has three sons and enjoys attending her boys’ activities, volunteering in their schools, working on house projects, and enjoying everything about this wonderful community. 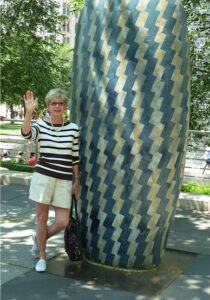 Anne White was raised in the Yakima Valley and studied Business and Sociology at the University of Washington. After graduation, she was hired as one of the first two women in the Northwest to enter the Management Training Program for J.C. Penney and was among the retailers who opened the extensive Southcenter Mall in Tukwila. Anne and her husband, Robert, travelled to Korea where he served as 2nd Lieutenant in the military and she worked as a Recreation Assistant. They lived in New York City and Montana, where Anne served as head of the Docent Program for the Yellowstone Art Museum, before moving to Wenatchee. Anne has worked at Davis Furniture in sales and design and Wenatchee High School as a Career Coordinator and has been active on several boards, including Apple Blossom and the Performing Arts Center, where she served as President. Anne and Robert have one daughter and love living in a community that is so willing to work together and give back.

The Community Foundation also extends gratitude and appreciation to two outgoing board members Robert White and Mary C. Murphy. Robert has served on the foundation board for 26 years (since its inception in 1986) and has passed the torch on to his wife, Anne. Mary served on the board for 10 years, the last three serving as Board Chair. Their contributions to the foundation have made a significant impact in the region. Their expertise and dedication have helped propel the organization to its peak performance and is gratefully acknowledged!

View All News & Events
Posted in Uncategorized
!
!
Subscribe to Newsletter