Give NCW Raises $147,166 in Donations for Nonprofits 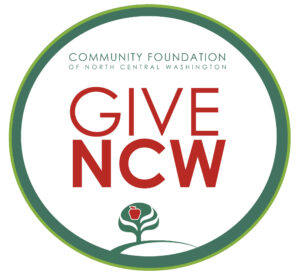 “We had no idea what to expect, but the results were amazing.” said Beth Stipe, the foundation’s Executive Director. “It’s just another reminder of how generous people are in this region and how much they care about their community.”

Give NCW is a crowdfunding campaign that the Community Foundation of NCW launched on Thanksgiving Day and concluded December 31st to raise funds for 25 nonprofits across North Central Washington. The nonprofits chosen to participate were recipients of the foundation’s Regional Impact Grant – its largest competitive grant program. Applicants sought funding for a specific project and awarded grants from $5,000 to $15,000 – the remainder of the funds each organization needed was published on www.givencw.org, an online giving catalog.

“It was really easy to give” said one donor, “I even did it from my phone!” This was the first time the foundation entered the realm of crowdfunding.

“So many people are giving through crowdfunding now – it’s easy, it’s fast, and you get to be a part of something cool happening in your community, or helping people in a rough situation” said Stipe. “Give NCW was full of programs that people could relate to and spoke to the hearts.”

The idea to use crowdfunding came from Orcas Island Community Foundation and Smalldog Net Solutions. Smalldog is the foundation’s database that includes an “online shopping” feature of crowdfunding, which OICF has been using for a few years. The program was piloted at CFNCW in September 2015 for the Give Methow campaign which generated over $180,000 in donations in one month.

But Give NCW was established for more than just fundraising. “We thought this would be a great way for the people to learn about projects happening in their community” said Stipe. “Give NCW provides the opportunity to really learn about what it takes to help our local foster kids, or build a home for a family, or maintain an art culture in our communities and become part of making it happen.”

Give NCW will be a permanent addition to the Regional Impact Grant program, and the foundation is already looking at ways to make it better next year. “We really didn’t have too many hiccups with this being our first crowdfunding experience, but there are a few little things that we know will make it more exciting, rewarding, and fun for everyone next year.”

The next Regional Impact Grant cycle opens July 1, 2016 and Give NCW is set to start again on Thanksgiving 2016.